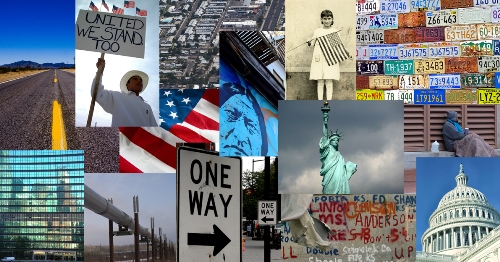 The Centre for Transnational American Studies was launched at the beginning of the spring 2010 semester. It is based at the Department of English, Germanic and Romance Studies (Engerom). The centre was established to provide an institutional focus at Engerom, and at the University of Copenhagen more generally, for teaching and research related to the United States.

The centre is built around a core of tenured and tenure-track staff with training and research expertise in American studies, American history and society, and American literature and culture.

This core staff teaches and researches various aspects of U.S. history, literature, politics, and culture in regional, national, and global frameworks. As its name indicates, the Centre places a special emphasis on transnational American studies: teaching about and research into the United States within wider hemispheric, transatlantic, transpacific, and global contexts. There are various intellectual and institutional reasons for this transnational emphasis: in the last ten to fifteen years, American studies has been transformed by what Robert Gross and Shelley Fisher Fishkin, among others, have termed a "transnational turn." Many American studies scholars have moved away from treating the United States only on its own terms or as an "exceptional" nation to explore the various ways in which the U.S. interacts-historically, socially, politically, economically, and culturally-with the wider world; Engerom's current research strategy (outlined in Danish) puts a particular emphasis on transnational studies.

The implementation of this strategy was also demonstrated with the establishment in 2008 of the PhD research program in Transnational and Migration Studies (TRAMS); the Centre is located in a large, multidisciplinary department at a Danish university that also houses British studies, Anglophone postcolonial studies, Spanish, German, French, Italian, and Portuguese. As the departmental research strategy states, this "disciplinary breadth provides excellent opportunities for interdisciplinary cooperation and the comparative study of cultures. In that connection, the links between Denmark and, for example, Germany, France, Great Britain and the United States in both the past and the present are an obviously relevant field of study." ("Instituttets faglige bredde giver store muligheder for tværdisciplinært samarbejde og for sammenlignende kulturstudier. I den forbindelse er samspillet mellem Danmark og eksempelvis Tyskland, Frankrig, Storbritannien og USA i fortid og nutid et oplagt studiefelt.").

Thus the centre can draw on the expertise of departmental colleagues in other disciplines, as well as colleagues working on the United States in other departments at the University of Copenhagen. Some of these colleagues are affiliated staff at the Centre for Transnational American Studies, supplementing the core staff of American studies specialists.
xbg210@hum.ku.dk
Tlf: 51 30 28 16

The Centre for Transnational American Studies at the University of Copenhagen brings together a cohort of research-active staff whose interests encompass a wide range of American studies topics. Current research being conducted by individual core staff members includes Chinese-American relations; U.S. environmental history; and transnational migration in literature of the U.S. South. For more details of publications and current research by individual staff at the Center, please see the individual staff profiles.

Core staff at the Center for Transnational American Studies are also involved in the following collaborative research projects:

--a research project in collaboration with the universities of Manchester, Florida, and Cambridge, built around a series of four conferences (2008-2010), and resulting in three forthcoming books (2013-14).

"Understanding the South, Understanding Modern America" was an international and interdisciplinary project dedicated to exploring the historical importance of the U.S. South in shaping American culture, and to examining the region's relationship to the rest of the world from the colonial era to the contemporary period. The project was funded between 2008 and 2010, principally by the Arts and Humanities Research Council (AHRC) in Great Britain, with additional support from each of the partner institutions: the universities of Manchester, Cambridge, Copenhagen, and Florida. Research was based around a series of four conferences in Manchester (May 2008), Florida (January 2009), Cambridge (May 2010), and Copenhagen (August 2010). Click here for more details.

The four conferences generated a series of three edited volumes, all of which are contracted to the University Press of Florida. The first volume, Creating Citizenship in the Nineteenth Century South (edited by William Link, David Brown, Brian Ward, and Martyn Bone), is forthcoming in May 2013 (see http://upf.com/book.asp?id=LINKX002); it will be followed by The American South and the Atlantic World, also in 2013 (see http://upf.com/book.asp?id=WARDX002).

For more information on "Understanding the South," see www.arts.manchester.ac.uk/southnetwork/. See also the project discussion board, launched in February 2010: http://understandingthesouth.wordpress.com/

To integrate research and teaching, the Contemporary America Project (CAP) originated in 2001 with the goal of publishing an authoritative textbook for use in Scandinavia. By 2005, that goal was broadened to include a global audience. The primary product, Contemporary America, is comprehensively updated and is published now in its 3rd edition. Its original placement in the highly-regarded Contemporary States and Societies Series (London: Palgrave Macmillan) has been complemented by publishing houses in the US (NY: St. Martin's) and China (Beijing: Renmin University). CAP also published Trading Cultures: Nationalism and Globalization in American Studies (2002) and Transnational America: Contours of Modern US Culture (2004). Seven of KUA's American Studies colleagues joined scholars from Africa, Europe, and the United States in contributing essays to these books. Future research and teaching outreach goals will look at the unfolding and sometimes chaotic relationship between nation and globe as it affects political, social, cultural, and economic life.

Engerom students are involved in the project through courses charting contemporary America and its dilemmas which are offered every year at the valgfag level. These courses result in large numbers of BA projects, MA theses and PhD dissertations. To further the project, an annual student study excursion to the United States-Boston, New York and Washington-connects project leaders and student participants to a larger national, transnational and global group of policymakers and activists. More than 350 Engerom students have participated thus far, and several have returned to the U.S. for placements in Congress, with interest groups, the diplomatic corps, and the media.

Members of staff at the Center for Transnational American Studies are involved in a wide range of teaching within the English program at Engerom. BA English students have the opportunity to take a range of optional courses (valgfag) in American studies subjects. Recent and forthcoming optional undergraduate courses in American studies have included "The Rise of the Modern: A Social History of American Art, 1900-1950"; "Contemporary American Dilemmas, 1989-2011"; "Freedom and Race in Nineteenth Century American Literature"; "Twentieth Century African American Women's Fiction"; "Reinventing the Southern Renascence: Literature of the American South, 1930-1955"; "Women's Literature of the American West"; "American Fiction 1865-1915: Different Americans, Different Americas"; "Native American Autobiography, 1830-1936"; "The American Political System"; "American Poetry from the Colonial Period to the mid-Twentieth Century"; "American Fiction Between the Wars"; and "Urban Ethnic Geographies in the U.S."