Left and Right of the End of Empire 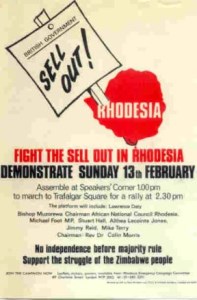 Bill Schwarz will be addressing the transformation of the political right in the United Kingdom at the time of decolonization in the 1960s and 1970s. His discussion will turn on the figure of Enoch Powell, and on the larger populist presence of Powellites, of various different stripes, which moved near to the centre of British political life in the period from 1968-1972. These shifts underwrote a radical recomposition of British political life, and anticipated the creation of the emergent neo-liberal order of our own times.

Stephen Howe will address how activists and intellectuals on the British political left engaged with the residues and aftermaths of empire from the mid- 1960s onward. As the relatively straightforward business of arguing for political decolonisation in Britain’s remaining dependencies dwindled in importance, a more diffuse and sometimes divisive range of issues took its place. These included argument over American ‘imperialism’, conflict in the Middle East, dispute over immigration and race relations within Britain, and the unfolding crisis in Northern Ireland (seen by many on the left as a colonial issue). What some called Third Worldism became a major force on the left in Britain, as elsewhere in Europe, during these years. Howe will – complementing Bill Schwarz’s focus on the British political right of the same era – attempt an overview and ’balance-sheet’ of these movements and ideas, assessing their enduring significance.

Bill Schwarz is Professor of English at Queen Mary, University of London. His research focuses on postcolonial history, looking particularly at the end of Britain’s empire. He is presently writing a three-volume history entitled Memories of Empire; the first volume, The White Man’s World, won the Longman-History Today prize for best history book in 2013. He is also working on historiographical questions concerning the conceptual underpinnings of postcolonial history, and on the relations between history and memory.

Stephen Howe is Professor of History and Cultures of Colonialism at the University of Bristol. He is currently working on the intellectual consequences of decolonization, anti-colonial intellectuals, and the legacies of imperial violence. He is also the editor of Journal of Imperial and Commonwealth History. His publications include an edited volume entitled The New Imperial Histories Reader (New York, 2010), Empire: A Very Short Introduction (Oxford, 2002), and Anticolonialism in British Politics: The Left and the End of Empire (Oxford, 1993).